Here are some of the post on this topic:

Hydro Floss Machine Reservoir  -  It is of the key components to the Hydro Floss.  Therefore, you'll want to make sure that it is well managed and ready to go. 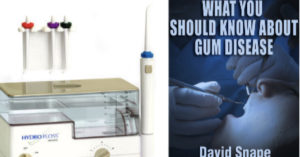 The Hydro Floss Machine is one of the most powerful tools around to help  you achieve and maintain the health of your gums (periodontal health) at home.  And it helped me to reduce my periodontal pocket depths. In addition to that, my dentist even told me that I no longer needed to have the deep cleaning treatment she had been recommending to me.

Of course, this would be in conjunction w with your dentist at regular visits to measure your periodontal pocket depths.   And, your dentist might be impressed by your results!   Mine was and I was happy to have the fix for my problem.

You can read about my personal journey with the Hydro Floss Machine here.

I found that the Hydro Floss machine helped me to shrink my periodontal pockets back to healthier ranges ns I avoided a scaling and root planing treatment or 'deep cleaning'.   My dentist was impressed and told me I no longer needed the deep cleaning treatment she had been recommending for over a year.  But, she never did ask me what I did to make things better.  I have always wondered why she didn't want to tell her other patients?

This machine is a great adjunct to your regular dental cleanings.  The Hydro Floss Machine can help, according to peer reviewed journal studies in the Journal of Clinical Periodontology, to reduce the amount of plaque and tartar buildup between your regular dental cleanings. Thus, your gums may become healthier as a result.  Again, this is measured by your periodontal pocket depths that your dental professional can take for you.

Every family could use and benefit from the Hydro Floss Machine. Therefore, it is definitely worth a try.

Read more about:  The HydroFloss Machine

Find Your Own Hydro Floss Machine

Purchase a Hydro Floss Machine at one of these two locations to find and purchase one;

Existing and new customers (who make a hydro floss machine purchase) can get special information from the writer of this blog and the author of the book:  What You Should Know About Gum Disease .  Just call with your order number handy and ask for David.   You may also order by phone at the number you will find at the above sites.

Other Experiences With The Hydro Floss Machine

I've spoken to many people over the years.  As a result, I have learned that many people have had similar results to mine.   Many have been able to reduce their periodontal pocket depths.

Quite a few have told me that the dentist is impressed by their gum or periodontal health.

You can read a number of reviews here.

Again, if you are looking for answers, then you may find that reading more about the Hydro Floss Machine may set you on the path that you have been looking for.

I know that it helped me to restore and maintain my periodontal health and others have told me similar things as well.  As a result, there are many people who have learned this secret, but many more who may be delighted to find out about it.

I will take limited questions from folks who want to talk about it.  However, the more lengthy in depth discussions are reserved for customers of Toothy Grins.

Here are some of the post on this topic:

Hydro Floss Machine Reservoir  -  This is one of the key components to the Hydro Floss. Therefore, you'll  want to make sure that it is well managed and ready to go.

The Hydro Floss machine reservoir can be completely replaced. Or, if you just need the o-ring or the plastic insert they can also be purchased

Replacing your Hydro Floss Machine Reservoir can save you money. No need to buy a new machine just because you dropped the tank on a tile floor and it shattered.

Putting something sticky or gritty in your HydroFloss is also problematic to the health of your reservoir. In order to avoid this thoroughly clean all surfaces after each use.

Avoid putting anything in your Hydro Floss, aside from regular tap water. The reason: Using your hydrofloss machine without additives is not only possible, but desirable. Learning how to use your HydroFloss properly can lead to better results. Also, it can lead to a longer life for the machine itself.

Sometimes, you don’t need the entire Hydro Floss machine reservoir. You may only need the plastic insert or the o-ring.

The plastic insert can fall out and get lost. This is relatively rare. However, it does happen.

The o-ring can become loose or lost. Therefore, you’ll want to replace it. If the o-ring or the plastic insert are missing, your Hydro Floss machine reservoir may start to leak.

The reservoir does come with both the plastic insert and the o-ring in them. Therefore, if you buy a hydro floss machine reservoir as a replacement part, you will not have to worry about buying an extra plug or o-ring.

However, they are both available separately, should that be all you need. Replacing one or both of them is significantly less expensive.

If you need other Hydro Floss Machine Parts, you can read about them here.

To read more about the Hydro Floss Machine, click here.

Replacing Hydro Floss machine parts can save you money over purchasing a new machine.

The Hydro Floss machine is one of the most powerful devices that you can have at your command for your in-home dental care.   This device has helped many people to reduce their periodontal pockets, thereby improving their gum health.  I also have my own personal experience to share.

This is the objective way to measure your gum health.  Generally speaking, when your pockets are 3mm or less, most dental professionals would deem your gums to be healthy at that point. Since this is a measurable item, you can keep records of how you improve of fail to improve.   Theoretically, when your pockets are 3mm or less, tissue damage, due to gum disease, stops.  This would include bone loss.

The Hydro Floss Machine Is The Best

This machine has helped a lot of people reduce their periodontal pocket depths.   I have personally spoken to people where this has been the case and it has also been the case for me personally.

Being told that you have gum disease is sometimes a frightening experience.  Hearing that you need an expensive or advanced treatments is equally scary.  The pressure is on,  what will you decide to do?  I know the feeling:  You don’t want to lose a tooth or multiple teeth.

I had been told back around 2005 that I had moderate gum disease and that I needed a special treatment.  This treatment is often referred to as a “Scaling and Root Planing Treatment”, a SRP or a “Deep Cleaning”.   These types of treatments can be expensive.  Sometimes they like to do one quadrant at a time.  Other times, they like to do two quadrants at a time.  In any case, the average for such a treatment that may take multiple visits is around $1500.  In some parts of the country it is much higher.

Expense is not the only factor.  There is also pain.  They may choose to numb your gums during the treatment as they use instruments to reach down and scrape ‘under the gum line’.   The narrative they offer is that tartar has built up below the gumline and they need to scrape it away.

Often times, they claim that this is the only way to get rid of built up tartar under the gum line.   I did not want this type of treatment after I heard about it.

They were very insistent that I get this treatment right away, like that very day.   I declined to get the treatment, feeling in my gut that it would be a mistake to do so.  They threatened that if I did not get the treatment that day, they would force me to sign a waiver that it was not their fault if I lost my teeth.

Fortunately, I stood my ground under this onslaught of fear mongering.  I’m glad I didn’t cave because what I figured out later proved, to me at least, that there are other ways to get your gums back to a healthy state again.

Insurance Will Pay – By Itself, Not A Good Reason To Do A Procedure

They also used the argument that if I got the treatment right away instead of a regular cleaning that insurance would pay for it.   In my opinion, getting something done just because insurance will pay for it at that time, is not the best reason to get any kind of treatment from anyone.   It’s more like a sales tactic.

I declined, despite the pressure, fear mongering and appeals to my wallet.

I Should Have Left Them Behind For Good

What I should have done next would be to leave them for good.  But I kept going back,  but I never let them do the ‘deep cleaning’ treatment.

Instead, I tried many things to get my gums healthy again.   I tried different mouthwashes, essential oils, oil pulling, various toothpastes and dental flosses.   But nothing worked.  Every time I went back, they insisted that I still had a problem.

Then, I finally tried the Hydro Floss Machine.  I am glad I did.

The next time I went back the experience was great. The dentist and hygienist stared at my mouth in disbelief.  The pockets had shrunk.

The dentist said to me, “Whatever you are doing, keep it up.  You don’t need that treatment anymore”.    I was delighted, but later, I was disappointed in the dentist because she didn’t seem to want to know what I did.  It seems she didn’t want to find out and tell her other patients that were probably feeling as desperate as I was.   That was disappointing to say the least.

The Dentist Didn’t Want To Know

Why didn’t she want to know what I was doing?  I cannot say for certain, I can only guess.  If people have a way to get healthy gums on their own, it could interfere with a dental practice’s revenue.  Again, that’s just a guess, but it is hard for me to think there could be any other reason.   Maybe there is.  I’m not sure.

The Hydro Floss Machine Turned Out To Be The Best

At the end of the day, the Hydro Floss Machine turned out to be the best solution out of everything I tried.  The Hydro Floss proved itself as the easiest, quickest and also a relatively simple way to get the job done.  I continue using it to make sure that I keep my gums healthy.   I now sell the Hydro Floss at Toothy Grins Store  –  https://ToothyGrinsStore.com   That’s how much I believe in it.

Want to read more about this machine?   Check it out here:   https://www.toothygrinsstore.com/HydroFloss-p/hydrofloss01.htm